EGYPT IN THE AGE OF EMPIRES

This gallery covers the period after Akhenaten’s demise up to the Greek and Roman conquests of Egypt.

During the New Kingdom (c. 1540–1075 BC) the tomb of the pharaoh took the form of a series of corridors and chambers cut into the cliffs on the western side of the Nile at Thebes in the Valley of the Kings. A main theme of this gallery is the lives of the community of workmen – masons, craftsmen and artists – who lived in the village now known as Deir-el-Medina and worked in the royal tombs.

Thousands of documents excavated from the site, mainly in the form of limestone ostraca (chips of stone on which the villagers drew and wrote as a cheap and readily available medium), reveal a huge amount about the daily life of this village, from the cost of hiring a donkey to the outcome of court cases. The Ashmolean has one of the largest collections of ostraca in the world and the selection on show here (many are displayed in drawers in the gallery) give a fascinating glimpse into the lives of the inhabitants of this community.

Contrasting with these small chips of history is the Sinuhe Ostracon, displayed in the centre of the gallery. This is a large piece of stone inscribed with the Tale of Sinuhe, one of the most important examples of Ancient Egyptian literature.

Also on display in this gallery is a limestone stela restored from fragments found at the temple of Min at Koptos (dated around 1279–1213 BC) showing Ramesses II offering incense to the goddess Isis.

Another case explores the role of sacred animals in the cult of deities, something which fascinated Greek and Roman visitors to Egypt. Many gods were associated with a creature (such as Amun and the Ram) which could be worshipped as a living manifestation of the deity. This practice emerged in the Late Period when animals were bred within the temple enclosures of their relevant deity in order to be sacrificed. They were then mummified and buried in dedicated animal catacombs. 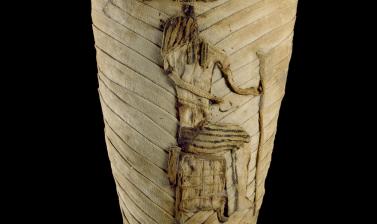 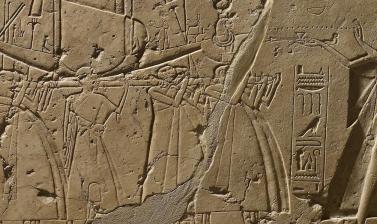 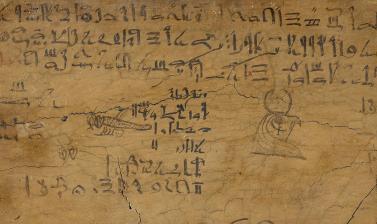