Opposite the Chantrey Wall
First floor, near the staircase leading up to the Modern Art gallery, 3M

The artwork Counterpoint was created as a response to the Ashmolean’s Chantrey Wall. It faces the imposing display of 16 busts by the sculptor Frances Chantrey representing wealthy, influential figures from the 18th century.

A recent research project investigating the sitters revealed that a large number of these individuals benefited, directly or indirectly, from the slave trade and including those who voted for its abolition. The Chantrey Wall represents the wealth derived from the sale and exploitation of enslaved African people.

Counterpoint is a conversation with Chantrey’s busts and a celebration of 21st-century Oxford. 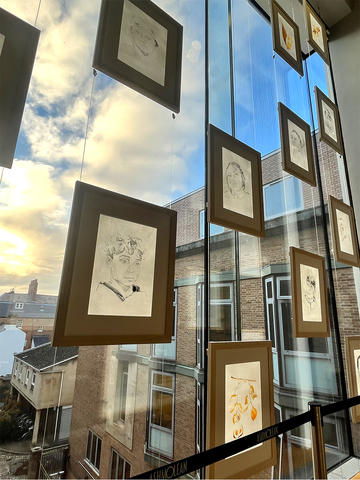 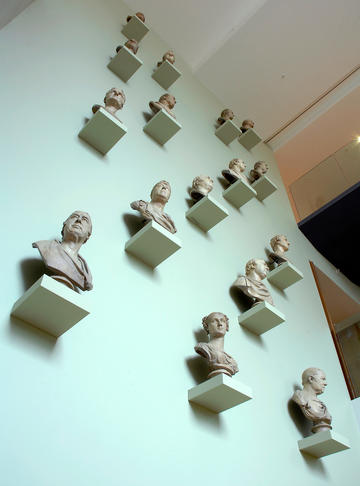 The 16 paintings in the display are by British artist Mary Chamberlain, and created on vellum, a material that for centuries has been used to encode British law. They incorporate pigments made from colonial imports such as coffee, saffron and nutmeg.

These pieces were conceived through a series of community engagement workshops exploring stories of people that shaped the histories and economies of Britain yet are absent from this museum’s walls.

By putting pigment to vellum, we add to the picture that the Chantrey Wall paints of British history and celebrating the many faces that represent our society.

The pieces are based on images and responses of people from local communities who generously shared their responses to the wall in workshops led by Community Connectors Olivia Holder and Rawz.

We would particularly like to thank the Black Excellence Project, Urban Music Foundation, Meadowbrook College and Transition Lighthouse for their participation.

The project was made possible thanks to the van Houten Fund.

About the Chantrey Wall busts

Sir Francis Chantrey (1781-1841) was one of Britain's greatest sculptors. His portrait busts of the renowned men and women of his time were admired for their naturalism and character.

The 16 examples on the Chantrey Wall in the Museum are from the Ashmolean's collection of nearly 170 plaster works by the sculptor. The sitters portrayed include artists, scientists, writer, politicians, colonial governors, statesmen and Royal Family members.