The light of the heavens 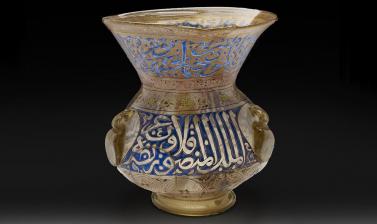 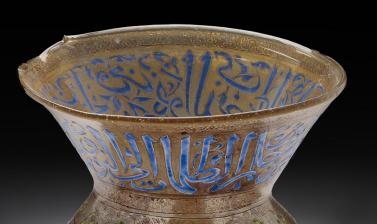 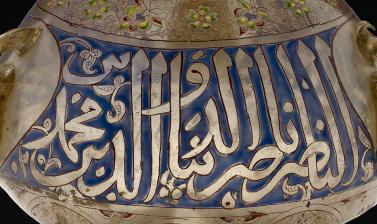 In the Islamic world glass oil lamps were used to light the interiors of public buildings such as mosques, madrasas (Qur’anic schools), khanqahs (hospices) and mausolea. Arranged in rows, these fragile vessels were suspended from the ceiling by means of long chains attached to the glass loops on their sides.

The production of such glass furnishings became popular under the Mamluk Dynasty (1250–1517) of Egypt and Syria. Earlier Islamic rulers of the region had depended on slave (Arabic: mamluk, literally ‘owned’) soldiers who eventually established their own rule. Rapidly, the Mamluks created an extensive empire with its capital at Cairo which became the economic, cultural and artistic centre of the Arab Islamic world. Prosperity was generated by an east–west trade in silks and spices and this supported the Mamluks’ lavish patronage of architecture and decorative art; glass, inlaid metalwork, woodwork and textiles were prized around the Mediterranean as well as in Europe. The 13th and 14th centuries, in particular, saw the climax of enamelling and gilding, the techniques used to decorate this and most surviving examples of glass lamps.

Blue enamel highlights the two inscriptions – an excerpt from a chapter of the Holy Qur’an known as the surat al-Nur (24:35), comparing God to light, and a dedication to the patron, Sultan Muhammad Qala’tun (r. 1294–1340), who founded a number of public and pious institutions. Red, green and yellow enamels, applied in finer strokes and alternated with gilding, are employed for the decorative bands.

Islamic Lamp
Egypt or Syria
AD 1299–1340
Glass, blown with polychrome enamels and gilding
Height 26.9 cm
Purchased with the assistance of the Friends of the Ashmolean Museum
View on our online Collection Online Site: EA1972.5
License this image - visit the Ashmolean Image Library