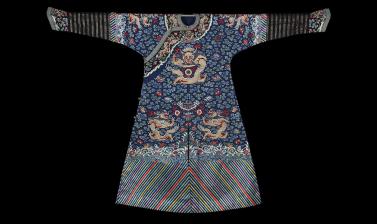 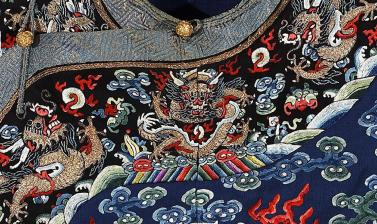 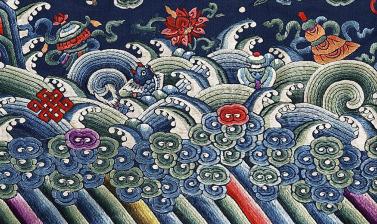 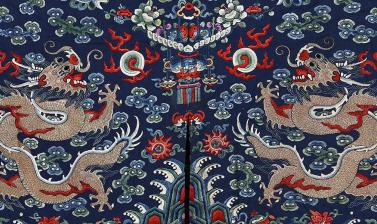 A high-ranking Chinese official would have worn this formal silk robe, possibly at the imperial court, during the 19th century. The shape is based on a traditional Han Chinese design with some adaptations to the clothing style of Manchu horsemen who had crossed the Great Wall of China and established the Qing dynasty (1644–1911).

As a minority ethnic group ruling millions of Chinese, the Manchu adopted Chinese approaches to government but asserted their own cultural identity through their traditional tribal hairstyle and clothing. They replaced the flowing robes and extravagant slippers of the previous Ming dynasty (1368–1644) with boots, trousers and coats that were suitable for riding and hunting. They did not customarily use silk, but instead wore wool and furs; deer skin rather than gold stitching was the fabric reserved for the ruling classes. On this robe, the frontal vent and horseshoe-shaped cuffs are traces of that horse-riding heritage.

The blue ground of the robe is embroidered with Buddhist motifs – bats, conch shells and eternal knots – amid stylised clouds. The dragons on the main body and the borders are of gold-wrapped thread held down with couching stitches, while the embroidery elsewhere uses a variety of stitches, including satin stitch and ‘Peking knot’. The diagonal stripes at the hem are simplifications of the more elaborate depictions of waves and rocks that appear on the border of earlier robes.