Money in Constantinople, the Sea of Marmara and the Northeast Aegean during the 14th century

About the research project 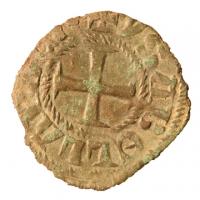 Billon tournois from the Thasos excavations of the French school at Athens. Image courtesy of Thasos Archaeological Museum.

In the centuries before its final demise in 1453, the Byzantine Empire experienced momentous geo-strategic, political and socio-economic changes. This project aims to record and study coin production and coin finds in the area around Constantinople and
thereby explore the monetary dimension to the collapse of the Byzantine empire, particularly during the long 14th century.

The focus of the project is the Byzantine Empire, as much as the emerging Ottoman polity which eventually displaced it, the different Genoese entities in the northern Aegean and Pera, and more marginally the Second Bulgarian Empire. Underlying the political
mutations are the populations at large and the commercial integration of the entire area. The monetary data reveal, amongst other things, the effectiveness of economic and fiscal policies of the different polities, the standard of living of various
populations and their participation in commercial activities, and the impact of major military disruptions. In order to gain a comprehensive picture of the monetary situation, the coin issues of the area and period need to be investigated and a catalogue
of local finds established.

This project uses the analysis of coins and coin finds, considering all metals, all denominations and coins from all contexts (hoards, single finds, and collections) to answer the following research questions:

This project is being carried out in three phases. The first phase is the recording and analysis of a number of coin finds in specific museums in Greece and Turkey. The second phase is the completion of this recording activity in Turkish and
adjacent Bulgarian museums. The policy is to publish specific coins in context gradually. The established monetary data, in the third phase, are drawn together more comprehensively and confronted with other forms of historical evidence.