Lisa and Bernard Selz Curator for Ancient Egypt and Sudan 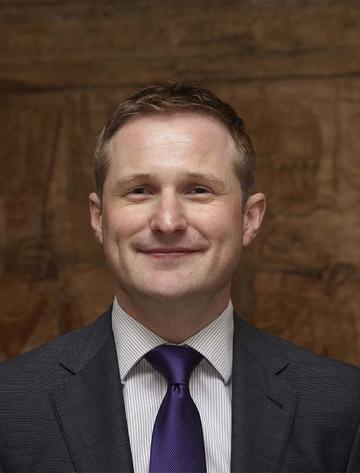 Research Summary
My research interests centre on the archaeology and material culture of ancient Egypt and Sudan. I specialise in the late Predynastic and Early Dynastic periods (late 4th–early 3rd millennium BC), for which the Ashmolean holds the most significant collections anywhere in the world outside Egypt. I focus on the dynamics of the transformation to statehood, whereby Egypt became a unified polity ruled by a single king, and the processes by which dynastic traditions in art, religion, and written language became established. My current work re-examines a major group of early votive objects and the temples from which they are presumed to originate. I am also interested in the history of museums, particularly the relationship between archaeological fieldwork, object distribution and the development of museum collections, as well as the disciplinary histories of archaeology, anthropology and Egyptology.

CV
Liam McNamara is Lisa and Bernard Selz Curator for Ancient Egypt and Sudan at the Ashmolean Museum and Director of the Griffith Institute at the University of Oxford. He was Lead Curator on the redevelopment of the Museum’s Egypt and Nubia galleries which opened to the public in November 2011. Prior to his appointment at the Ashmolean in August 2010, he was a Project Curator in the Department of Ancient Egypt and Sudan at the British Museum. Liam also co-curated (with Paul Collins) the temporary exhibition Discovering Tutankhamun at the Ashmolean from 24th July–2nd November 2014.

Liam is Assistant Director of the Ashmolean’s Expeditions to Hierakonpolis and Elkab in Egypt. He has worked as an archaeological illustrator and field archaeologist on excavations at Kom Firin in the western Nile Delta (directed by Neal Spencer) and at Hierakonpolis in southern Egypt (directed by Renée Friedman). He has also worked on an epigraphic survey of sites in northern Sudan with the British Museum (directed by Vivian Davies).

2008. The revetted mound at Hierakonpolis and early kingship: a re-interpretation [in:] B. Midant-Reynes and Y. Tristant (eds.) Egypt at its Origins 2. Proceedings of the International Conference "Origin of the State: Predynastic and Early Dynastic Egypt", Toulouse, 5th–8th September 2005. Orientalia Lovaniensia Analecta 172 (Leuven: Peeters): 901–936.

2007, with J. Baines. The twin stelae of Suty and Hor [in:] Z. Hawass and J. E. Richards (eds.) The Archaeology and Art of Ancient Egypt: Essays in Honor of David B. O'Connor (Cairo: Supreme Council of Antiquities Press): 63–79.