The Ashmolean’s collection of works by Camille Pissarro (1830–1903) is the largest in the world. Several are on display here alongside with works by other renowned members of the Impressionists including Manet, Van Gogh and Renoir.

Camille Pissarro was one of the most prominent members of the Impressionists and the only artist to exhibit at all eight Impressionist exhibitions between 1874 and 1886. Paintings in this gallery demonstrate the influence of fellow artists on style. Early works by Pissarro show Monet’s influence while Bretonne au Champ de Blé by Serusier (1864–1927) clearly shows the influence of Paul Gauguin whom he met in Brittany. View from my Window: Eragny-sur- Epte painted by Pissarro in 1888 demonstrates his brief experimentation with the painstaking Pointillist technique favoured by Seurat and Signac. You can trace Pissarro’s changing style through various works in this gallery finishing with Sunset at Eragny-sur-Epte, Autumn, painted the year before his death.

The portrait of Jeanne-Rachel, one of Pissarro’s children, is a poignant study as it was painted shortly before her death in 1874. His son Lucien, an artist too, moved to England in 1890 and founded the Eragny Press, showcasing his skills as a wood engraver. After Lucien’s death his widow Esther and his daughter Orovida gave the Ashmolean the greater part of the contents of Lucien’s studio and the paintings, drawings, prints and correspondence that he had inherited from his father Camille. As a result the museum holds the largest single collection of drawings by any Impressionist artist. These can be seen in the Western Art Print Room, https://www.ashmolean.org/departments/westernart/printroom/

To the left of the door leading to the gallery of 19th-Century Art is a small bronze of a ballet dancer cast from a wax model by Degas, a fine example of one of his favourite subjects. 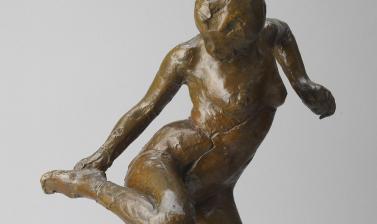 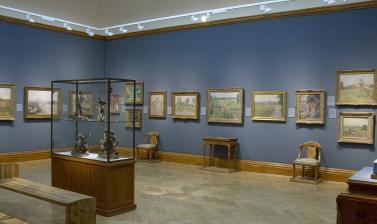