Inspired by trade and diplomacy 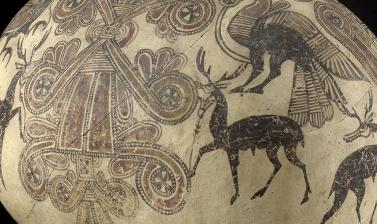 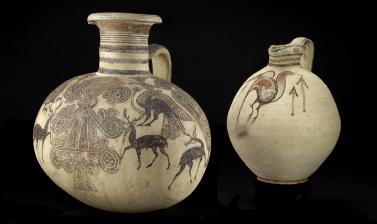 This jug is an exceptional example of a type of pottery vessel decorated in black and red paint known from ancient Cyprus. It typically features geometric designs and occasionally a single figure 'floating' on a plain background. This jug, however, is unique in both its shape and the combination and detail of its painted motifs. It was found in 1884 near Larnaca, the site of the ancient city of Kition, by the German archaeologist Max Ohnefalsch-Richter, and sold to the Ashmolean the following year.

The elaborate decoration in black and red covers the entire body of the vessel and repeats a number of motifs in a careful, symmetrical arrangement. On the front of the jar, opposite the handle, is a highly stylised tree with curling branches and palmettes flanked by stags and crested birds (perhaps ibis). A simpler version of this scene, without the birds, is repeated on either side. Many of these motifs, especially the stylised tree, are known from the art of the ancient Near East. Their appearance on this jug reflects the close trading, diplomatic and cultural relations that existed between Cyprus and the neighbouring civilisations of the Mediterranean as well as those further east.

It is possible that that the jug was made in or near Kition. The settlement had been founded by people from the city of Tyre on the coast of modern Lebanon – a region known to the ancient Greeks as Phoenicia. Like much of its imagery, the barrel-shaped body and trumpet-shaped neck and mouth of the jar were inspired by Phoenician pottery and artistic traditions.