A new image for a unified state 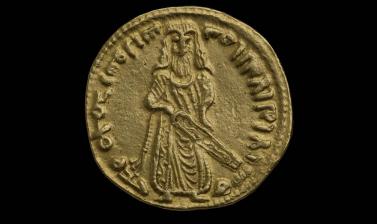 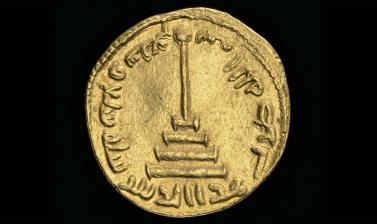 The standing figure which graces this exceptional gold coin of the late 7th century AD represents the Umayyad caliph, ’Abd al-Malik’ibn Marwan (d. AD 705). Robed in elaborate clothing, his hand on the hilt of an enormous sheathed sword and with a head covering (or long hair) which falls to his shoulders, the figure radiates authority and energy. ’Abd al-Malik reunited the Caliphate in AD 692 after a civil war, undertaking far-reaching repairs that created a centralised bureaucratic state and eventually established a single Islamic currency. He was also responsible for one of Islam’s greatest monuments, the Dome of the Rock in Jerusalem.

It has been suggested that ’Abd al-Malik created the ‘Standing Caliph’ figure in response to a solidus coin issued in Constantinople by his great rival, the Byzantine emperor Justinian II. Recent research, however, has questioned this interpretation. It is not the display of imperial regalia that impresses the viewer of the dinar, but rather the distinct modesty of the caliph’s attire. Above all, he lacks a crown, the defining symbol of Late Antique royal facade. Around the margin is the Islamic profession of faith, the shahada, and on the other side of the coin (the reverse) is a standard on steps and an Arabic legend.

A few years after the first issue of the ‘Standing Caliph’ type, ’Abd al-Malik abolished figural coinage altogether in favour of inscription coinage, most of them derived from the holy scripture of Islam, the Qur’an. The new coinage bore no reference to the caliphal presence at all.