This gallery not only explores the familiar subject of life in classical Greece but shows how between 750 and 500 BC Greeks founded hundreds of settlements abroad in southern Italy, Sicily, North Africa and around the Mediterranean and the Black Sea.

The Museum’s collection of Greek painted pottery is one of the finest in the UK and the decorations provide a fascinating snapshot of life in Ancient Greece. The pots are grouped around the gallery in themes including myths, sport and theatre, hunting and warfare, craftsmen and slaves, gods and goddesses, women and children, and symposia.

At the foot of the stairs to the rear of the gallery is a display of numerous decorated pottery oil jars (lekythoi) which were funerary vessels found in cemeteries all over the Greek world. These would have been buried alongside the dead or alternatively would have been set upright on the steps of grave monuments, brought by mourners as offerings. A broken pot shows how some were made with false interiors to reduce the outlay on expensive oil.

There is a small display of stunning gold jewellery and a fascinating exhibit of grave goods from Scythian and Thracian burial sites. Scythians were nomads who settled in coastal cities and adopted Greek customs while retaining many of their own. The grave goods from Nymphaeum in the Crimea show exquisite examples of golden jewellery such as a necklace of acorns and bracelets with rams’ heads. In contrast, the artefacts recovered from the Thracian grave are warlike in content, with bronze armour and a decorative gold breastplate embossed with animal heads.

A case of Greek carved gems on the opposite wall demonstrates that Greeks were skilled craftsmen. The Metrological Relief, a marble pediment with a carving of the upper part of a human figure, hangs above and illustrates standardised units of measurement used by the Greeks. 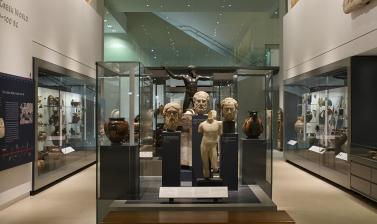 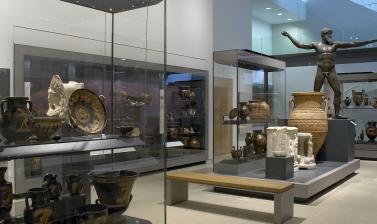 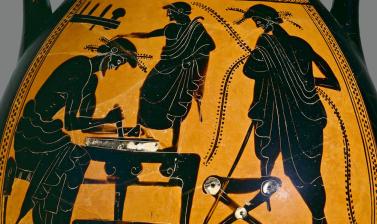 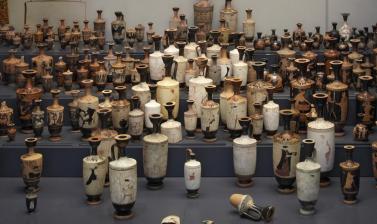 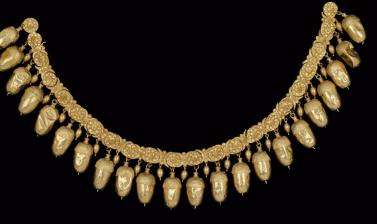