Renaissance means rebirth and is the term used to describe the renewed interest in the art, architecture and literature of antiquity that took place in Europe from the 1400s to the late 1500s. This gallery concentrates on the work of artists in Italy where Florence, Venice and Rome were key centres of artistic production and innovation. The Portrait of a Young Man by Alessandro Allori, hanging at one end of the gallery, shows how the wealthy would surround themselves with exquisite objects inspired by classical art.

The Hunt in the Forest, by Paolo Uccello (1397–1475) is one of the best-loved and well-known paintings in the Museum’s collection. This magical work depicts a hunting scene taking place at night and is crammed with figures of huntsmen – some on horseback, others on foot – accompanied by eager hunting dogs. The composition shows Uccello’s fascination with perspective and geometry as everything converges on a central vanishing point.

The central cases contain some fine examples of Renaissance bronzes, carvings and ivory work. You may recognise the figure of the Spinario (the young man pulling a thorn from his foot) from the full-size statue in the Cast Gallery on the ground floor. Here, it has been adapted to form an inkpot, a popular use for bronzes at the time.

In an individual case stands a bust of Michelangelo Buonarroti (1475–1564) one of the key figures of the Italian Renaissance. The Ashmolean holds a world-famous collection of his drawings which can be seen by appointment in the European Prints and Drawings Room. An enormously talented individual in so many fields, Michelangelo was also a notoriously difficult character. This bust was modelled by his friend, Daniele da Volterra, and clearly shows the broken nose which was the result of a brawl between Michelangelo and one of his pupils. 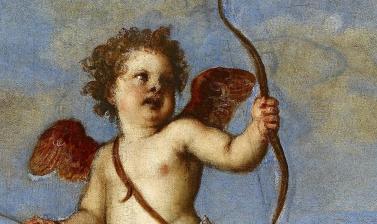 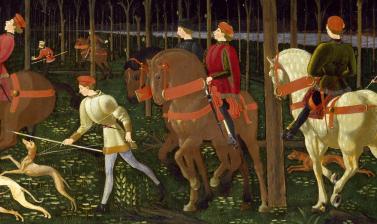 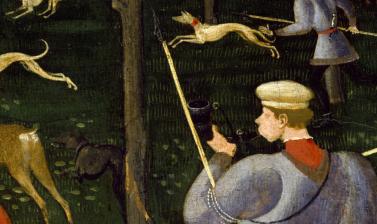 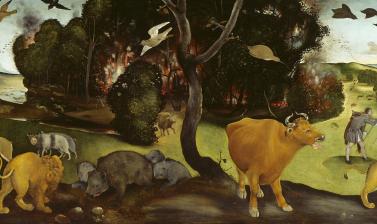 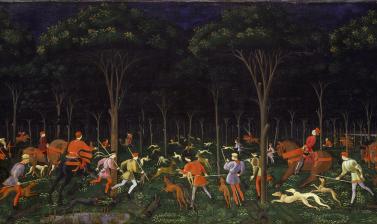