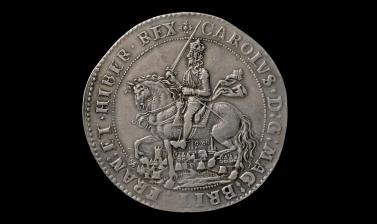 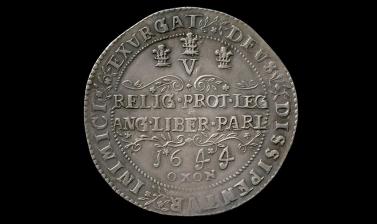 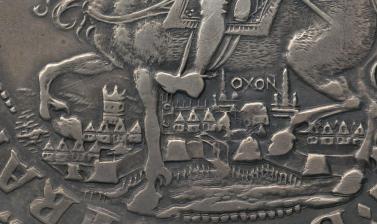 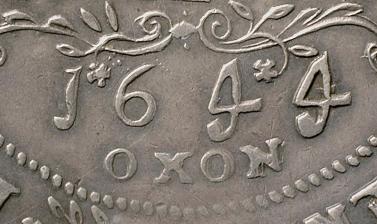 The presence of King Charles I in Oxford in 1642–6, during the English Civil War, is preserved in this remarkable coin, known as the Oxford Crown. It bears his fine portrait placed against the Oxford cityscape. During this period the king lived at Christ Church and the queen at Merton College. The reverse dates the coin to 1644 and advertises Charles’s aims in the Civil war – to uphold the Protestant religion, the laws of England and the freedom of Parliament.

Other cities have been alluded to in a stylised fashion on English coinage, but a detailed representation such as this is without parallel. The view of Oxford is taken from a north to north-westerly direction. In the forefront is the city wall, and, from the left, Magdalen College Tower, the spires of All Saints Church (now Lincoln College library) and the University Church of St Mary the Virgin, and the roof and tower of the Bodleian Library.

The Oxford mint was set up at New Inn Hall, at the present site of St Peter’s College, in January 1642. It was overseen by Thomas Bushell and Sir William Pankhurst, former Wardens of the Shrewsbury and Tower Mints. Stocked with silver from Oxford and Cambridge colleges, and with converted foreign money, the Oxford mint was a hugely successful enterprise and managed to cover Charles’s needs for coinage in his war effort. The Oxford Crown of 1644 represents only a fraction of this production. The mint closed in May or June 1646, when the city was besieged for a second time and taken for Parliament.