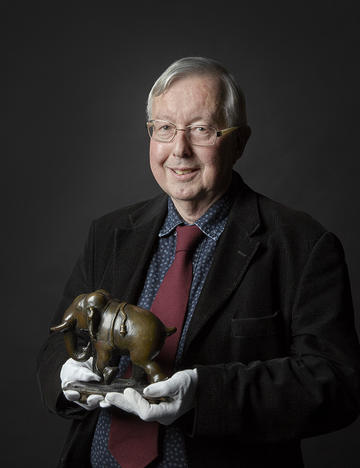 Research summary
My research has focused mainly on Indian art of the Mughal period (16th to 19th century), particularly the Rajasthani schools of painting, among which I have made a special study of the development of court painting at Udaipur. Other topics of past or current research have included 19th century British photography in India and the history of Indian board games.  I am currently writing an introductory book about the Ashmolean’s collections of Indian, Himalayan and Southeast Asian sculpture, painting and decorative arts, which will include many previously unpublished works acquired in the last thirty years.

CV
Andrew Topsfield is an Honorary Curator after retiring as Keeper of Eastern Art in 2016. He joined the Department of Eastern Art in 1984 as Assistant Keeper with responsibility for the Indian, Himalayan and Southeast Asian collections and was appointed Keeper in 2009. Previously he worked at the Victoria and Albert Museum as an Assistant Keeper in the Indian Department from 1978-84.

He read Oriental Studies at Oxford and took an MA in South Asian Studies at the School of Oriental and African Studies, London, where he began research in the field of Mughal period painting. His Oxford doctoral thesis on Mewar court painting was later published as Court Painting at Udaipur: Art under the Patronage of the Maharanas of Mewar (2002). In 2012 he received the Colonel James Tod Award at Udaipur for his publications on Rajasthani painting. He is a former Trustee of the Ancient India and Iran Trust, Cambridge, and a retired Fellow of St Cross College, Oxford.

2002 Court painting at Udaipur: Art under the patronage of the Maharanas of Mewar, Artibus Asiae Supplementum XLIV, Zurich: Museum Rietberg

2006 The art of play: Board and card games of India (Ed), Bombay: Marg Publications