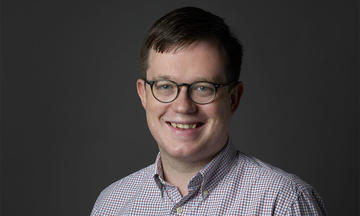 Research summary
My main research interests are Greek and Roman coins as well as the possibilities afforded by wider nuismatic digitisation. I am currently Digital Curator of Early Modern European coins in the Heberden Coin Room, working to digitise coins of this period. Recently, my research has focused on the coinage in the name of Alexander the Great as part of the now-finished Oxford–Paris Alexander project. I examined the impact and production of the vast numbers of coins struck during Alexander’s reign and in particular those issued at Damascus. I have also worked on the Coin Hoards of the Roman Empire project supporting the many international collaborators of the project and collecting and inputting data on hoards from Pompeii, the Netherlands, and France into the project web app.

CV
Simon Glenn is Digital Curator - Early Modern Europe. He has previously worked on a number of numismatic projects at the Ashmolean. In 2017 he curated the Ashmolean Money Gallery special display, Alexander the Great: Coinage from a common past. He co-edited with Frédérique Duyrat and Andrew Meadows a book on the coinage of Alexander the Great and the possibilities for new research provided by Linked Open Data frameworks. His most recent publication, published in 2020, is a monograph on the coins of the early kings of the Graeco-Bactrian kingdom.

2018. (with F. Duyrat and A. Meadows) Alexander the Great. A Linked Open World, Ausonius Éditions

2014. Heliocles and Laodice of Bactria: A Reconsideration, Numismatic Chronicle 174, 45–59