OXFORD AND THE PRE-RAPHAELITES

OXFORD AND THE PRE-RAPHAELITES' STORY

The fact that the Ashmolean has such a rich collection of works by the Pre-Raphaelites is a result of the many connections between the artists of the movement and the city of Oxford.

In the 1850s a group including Rossetti, Burne-Jones, Morris and Arthur Hughes, came and decorated the Oxford Union with murals.

It was in an Oxford theatre that the fateful meeting occurred between Jane Burden and the two men who would become her husband and her lover: Morris and Rossetti.

Art critic John Ruskin, the great champion of the movement, had long associations with the city and indeed left his own collection of exquisite drawings, including his teaching collection, to the University. 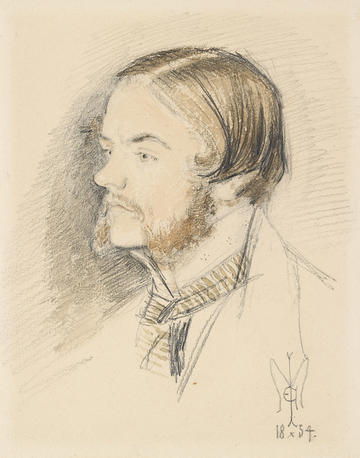 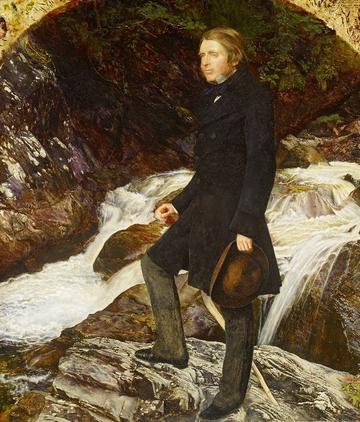 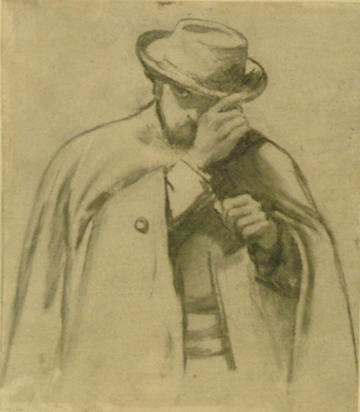 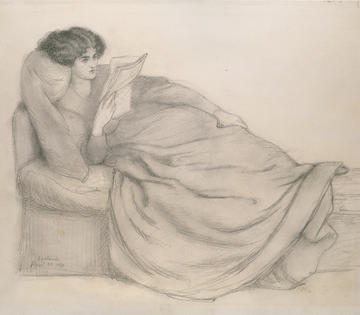 THE COMBES AND THE BROTHERHOOD

The most important connection that the Pre-Raphaelite artists had with the city of Oxford was through the support they received from the wealthy superintendent of the University Press, Thomas Combe (1796–1872), and his wife Martha (1806–1893).

The Combes were a generation older than the artists of the Pre-Raphaelite Brotherhood, but they almost adopted them. With no children of their own, the Combes became surrogate parents to the young artists, especially William Holman Hunt and John Everett Millais. 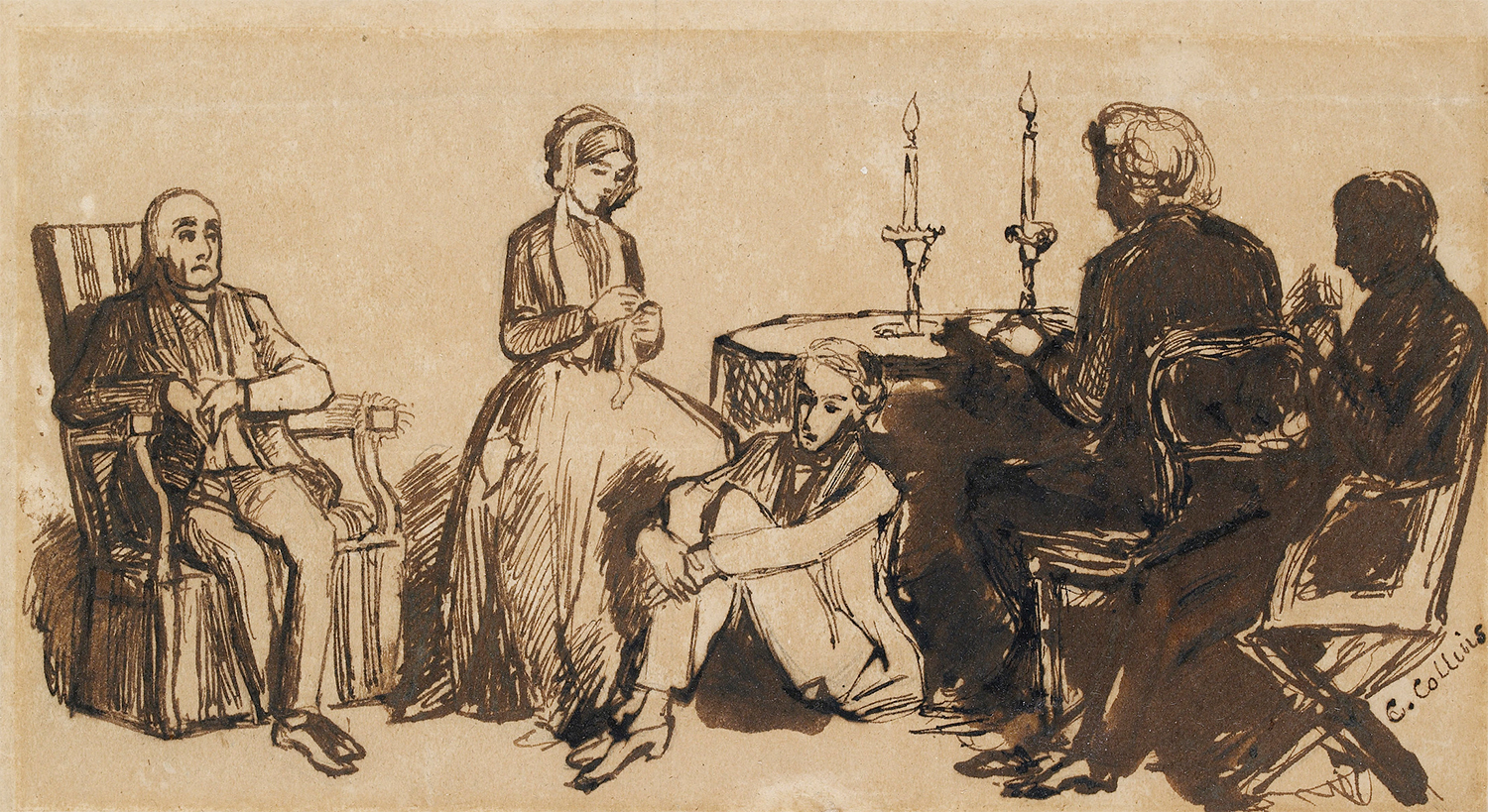 A pen and brown ink sketch of an evening at the Combes' house in Oxford by Charles Alston Collins, 1850-1851

The young, serious-minded artists would come and stay in their Oxford home, while they supported them through buying and commissioning works.

The informal sketch (above) by Pre-Raphaelite artist Charles Collins depicts an evening at Thomas Combe’s house with the white-haired publisher reading by candlelight – perhaps from the Bible – as the household gathers round. Martha apparently darns a sock while the lanky-legged Millais sits on the floor.

The contrast between this slight sketch and the wonderfully finished chalk drawings of Thomas and Martha Combe by William Holman Hunt (below), made a decade later, could not be more striking. 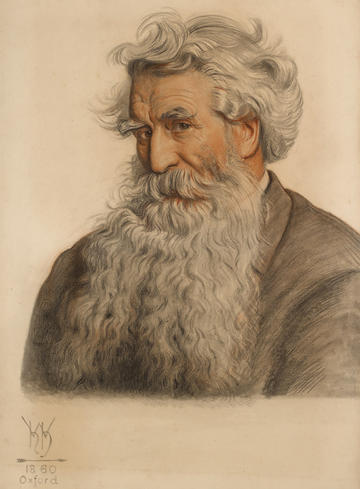 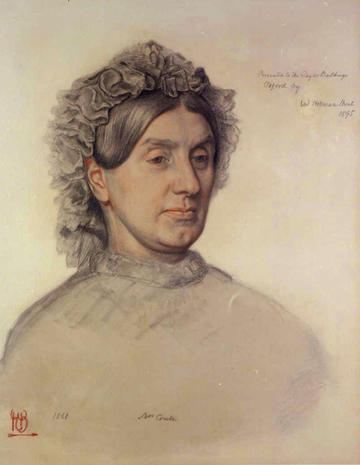 These important early Pre-Raphaelite patrons are commemorated masterfully in Hunt's proficient pair of portraits. Thomas sparkles with wit and good humour from behind his voluminous hair, eyebrows and beard, although the depiction of Martha is somewhat less flattering.

From September to November 1850, Collins and Millais, who were close friends, stayed with the Combes at their house in Oxford. Here Collins and Millais worked on two significant paintings, both of which are now in the Ashmolean. One of these, Convent Thoughts (below), painted in the Combes' garden, is an especially vibrant example of the early Pre-Raphaelite use of bright colours and intricate details. 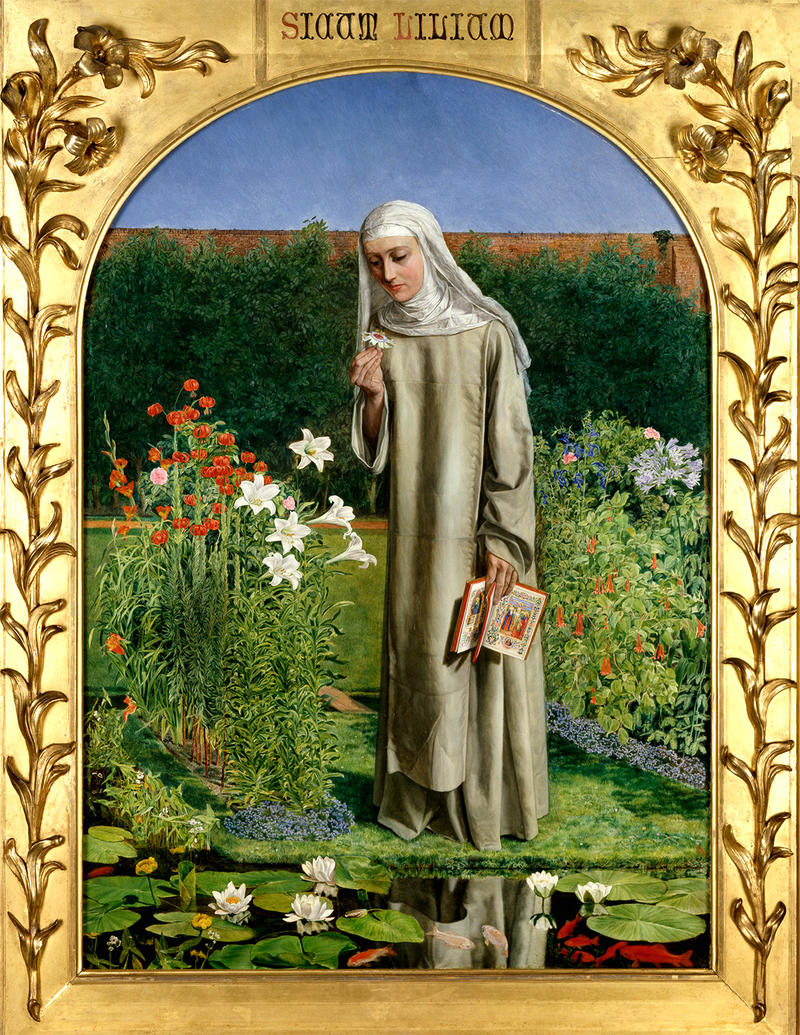 Collins' depiction of a nun was of great interest to the Combes as they were keen supporters of Tractarianism, also known as the Oxford Movement. Thomas Combe bought the painting for £150 – the largest sum that Collins ever made for a picture. It hung on the Combes' wall with two other religions works by Holman Hunt and Millais in a symbolic triptych of Hope, Charity and Faith.

This triptych now hangs in the Ashmolean's Pre-Raphaelites Gallery, thanks to the subsequent Combe bequest.

The Old Library of the Oxford Union was built in the 1850s as the University's new debating hall, in a Gothic style. In 1857, it became the setting for what is sometimes described as a second Pre-Raphaelite Brotherhood, when seven artists worked together on a series of murals to decorate the hall's upper walls.

This ambitious project was organised by Rossetti, who by this time was a close friend of Morris and Burne-Jones and also a friend of the hall's architect, Benjamin Woodward. Rossetti offered to decorate the interior for free board and lodgings, and unlimited supplies of soda water!

The other artists involved were Val Prinsep, John Hungerford Pollen, Arthur Hughes and John Rodham Spencer Stanhope. William Riviere and his son Briton painted the three panels that were left over when Rossetti and his friends abandoned the work at the end of the Long Vacation of 1857.

Most of the group Rossetti brought together weren't that experienced and the whole endeavour was reputedly quite chaotic. 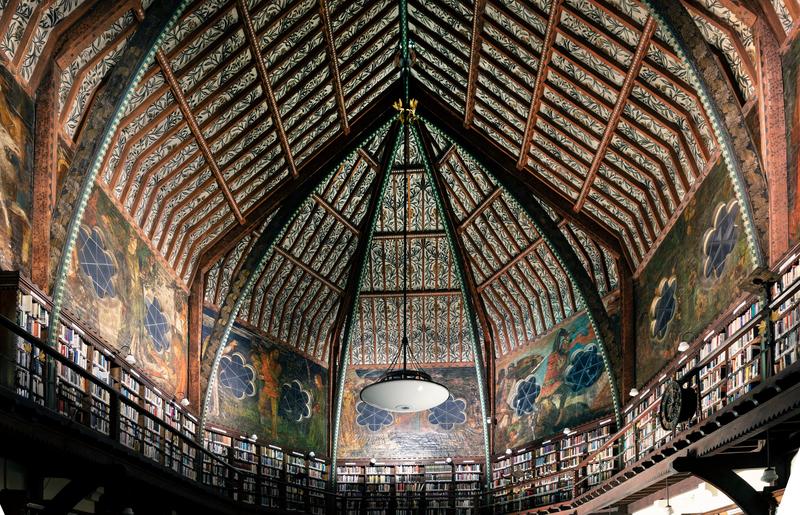 The paintings depict the Arthurian legends and the search for the Holy Grail, as told in the then recently published Morte d’Arthur by Tennyson.

The artists sometimes feature as subjects in each other’s paintings, and the future wife of William Morris, then Jane Burden, was persuaded to model for both Rossetti’s and Morris’s murals after first meeting with the artists during the Union project.

Rossetti's Lancelot and Queen Guinevere panel is probably the best-preserved, and Jane Burden was the study for Guinevere. It's a very intense, symbolic painting. 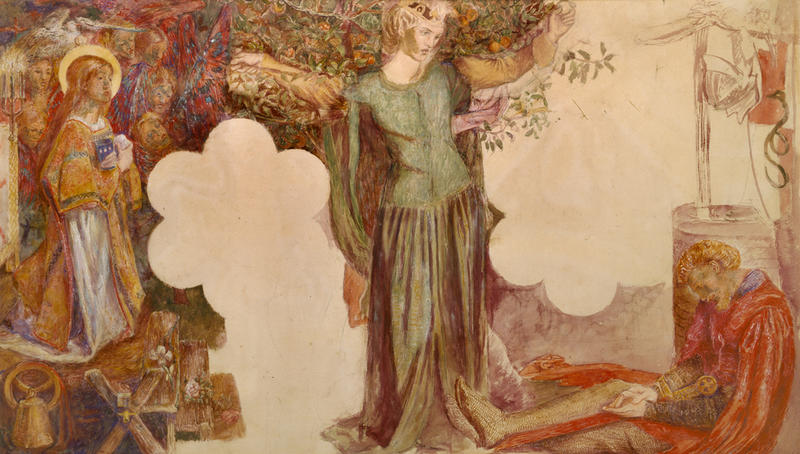 Rossetti's watercolour study for his Oxford Union fresco of Sir Lancelot’s Vision of the Sanc Grael,1857

Sadly, the murals' vivid colours faded quickly as the techniques used weren't long-lasting – they painted straight onto the walls without preparation. Now, during the day you can't see the murals distinctly, but on a clear winter's evening, the colours emerge and look very dream-like, just as they were intended to be seen originally.

The Pre-Raphaelites are perhaps most famous for their pictures of beautiful women whom Rossetti called ‘stunners’. Rossetti popularised this term and used it to refer to excellence in art and poetry, as well as physical beauty.

Although Rossetti’s studio was full of drawings of ‘Guggums’ – it was his pet name for Elizabeth Siddal, the model and artist who later became his wife, it was Jane Burden who was his most frequent model.

Jane was from Oxford, the daughter of a stableman. She was spotted by the artists at an Oxford theatre and became involved with them on the murals project. She married William Morris in 1859. She may already have been in love with Rossetti when she did this. 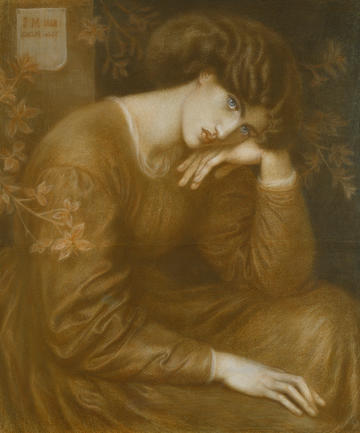 Reverie by Dante Gabriel Rossetti, 1868, one of his 'mythological' portraits of Jane Morris 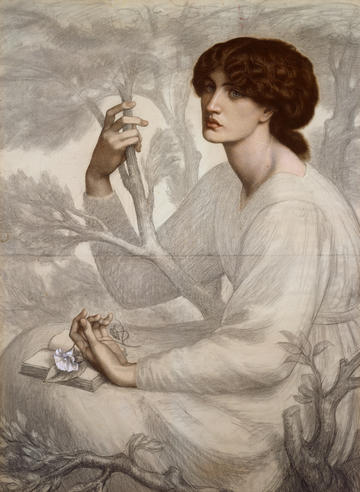 The Day Dream, by Rossetti, 1878-1880, another remarkable 'mythological' portrait of Jane Morris 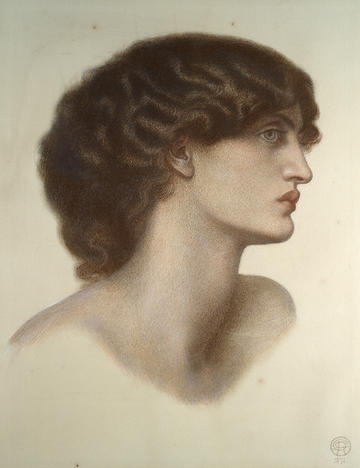 Jane became both Rossetti's and Morris's muse. She inspired many exceptional paintings and drawings by Rossetti, notably the enigmatic portrait 'personifications' such as The Day Dream and Reverie. Surviving photographs show she was as striking in real life as in her Pre-Raphaelite portraits, with her long neck and abundant dark curls.

The relationship between Jane and Rossetti became increasingly close in the mid-1860s, to the extent that Morris felt he had to leave the two of them alone together at his home Kelmscott Manor near Oxford, while he explored Iceland in 1871. Rossetti painted Jane repeatedly until his death.

John Ruskin was an undergraduate at Christ Church, Oxford, between 1836 and 1842. As a student, he lived with his mother in High Street and was often ill by all accounts.

In 1843, his Modern Painters was published anonymously, credited to him as 'a graduate of Oxford'. The book's themes were the careful study of nature and the insistence of 'truth' in landscape paintings. Ruskin's writings became highly influential. When the Pre-Raphaelites read his work, they generally ignored his praise of Turner, but adopted his overall philosophy.

Later in 1851, as an art critic, Ruskin spoke out in favour of the Pre-Raphaelites. He became irrevocably associated with the Brotherhood from that point and with their followers, befriending Millais and Hunt, then Rossetti, Siddal and Burne-Jones later on.

Ruskin was passionate about the teaching of drawing and donated a collection of drawings to Oxford University for use in training undergraduates and working people. These included wildlife and architectural studies. Many were his own drawings, including the delicately-executed examples below. Ruskin loved drawing birds. 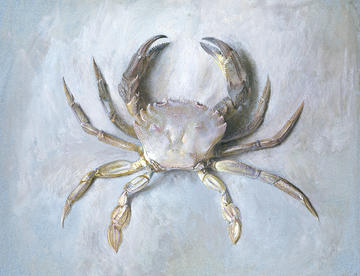 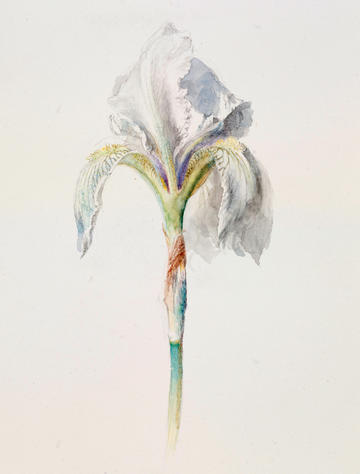 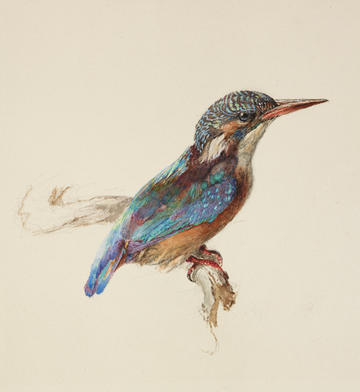 Study of a Kingfisher by John Ruskin, 1871

In 1869, Ruskin was appointed Slade Professor of Fine Art at Oxford. Critical of the teaching methods at the art schools of his day, he set out to found the School of Drawing in 1871, in the same, but restructured, premises within the University Galleries.

Uncover more Oxford connections in this talk with Colin Harrison, Senior Curator of European Art at the Ashmolean. Online and onsite at the Museum. Wed 2 Nov, 2-3pm. Book tickets now.